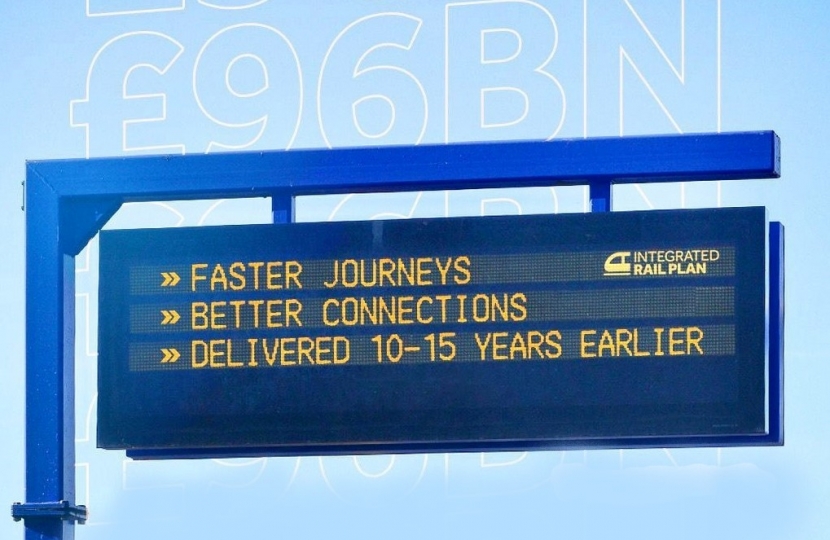 Regular, affordable and reliable public transport is vital to the wellbeing of our local communities. That’s why I’m working with a wide range of stakeholders, local groups and the Government to improve local bus and train services across the constituency.

City Region Sustainable Transport Settlement - a £570 million five-year funding settlement devolved to SYMCA to invest in transport infrastructure across the county. Proposed projects include: upgrades to bus infrastructure such as interchanges, waiting shelters, real-time passenger information, and priority bus lanes; investment in active travel routes for cycling and walking, including the Trans-Pennine Trail; accessibility improvements at train stations, including lifts to platforms at Chapeltown and integration of a new Park & Ride at Penistone; and significant upgrade and renewal of the Supertram network, replacing track and infrastructure as well as improving tram stops and refurbishment or replacement of trams.

Zero Emission Bus Regional Areas - £8.4 million for South Yorkshire to invest in new zero emission buses. These will initially be trialled on routes in Barnsley and around central Sheffield, with a view to increasing the number of zero emission buses across the county in the future.

Light Rail Restart Revenue Grant - more than £17 million provided by the Government to fund the continued operation and restart of Supertram services due to the impact of the COVID-19 pandemic. Huge falls in passenger numbers would have bankrupted Supertram and possibly led to the loss of the entire network without this emergency funding.

Restoring Your Railway - £50,000 awarded to SYMCA to fund the development of the Strategic Outline Business Case for my plan to restore passenger services on the existing freight line between Stocksbridge and Sheffield. This work is currently being undertaken by SYMCA and will be submitted to the Government later this year.

Access for All - a £20 million fund to improve disabled access at smaller railway stations across the country. This included money for improvements at Dodworth and Silkstone Common stations in our constituency.

Hope Valley Line Upgrade - a £137 million investment in the Hope Valley Line between Sheffield and Manchester. This will see upgrades to track and signalling to allow for extra services each hour and faster trains to run between the two cities, helping to connect South Yorkshire to the North West and beyond.

Better bus services - have your say

Better bus services - have your say

Miriam Cates MP continues to fight for better public transport for the towns and villages across the constituency of Penistone and Stocksbridge.

Miriam Cates MP talks about the importance of public transport and why the Government needs to invest in constituencies like Penistone and Stocksbridge.

Budget 2021 - investing in the Stocksbridge line

Miriam Cates MP talks about her delight at the Chancellor's decision to fund the next stage of her bid to bring passenger trains back to the Stocksbridge line.

Miriam Cates MP talks about the critical importance of providing local transport connectivity to ensure access to jobs, education and training but also to basic needs such as hospitals and shops.

Miriam Cates MP writes in The Yorkshire Post setting out why the Government's transport priority must be reliable and convenient local public transport.

Investing in The Penistone Line

Miriam Cates MP explains why investing in our train lines is central to levelling up - local bus and train services are vital for everyday travel - travel to work, education, training, shops, and healthcare.

HS2 - connecting our towns and cities

Miriam Cates MP backs the early delivery of the eastern leg of HS2, and the economic and social benefits it will bring.