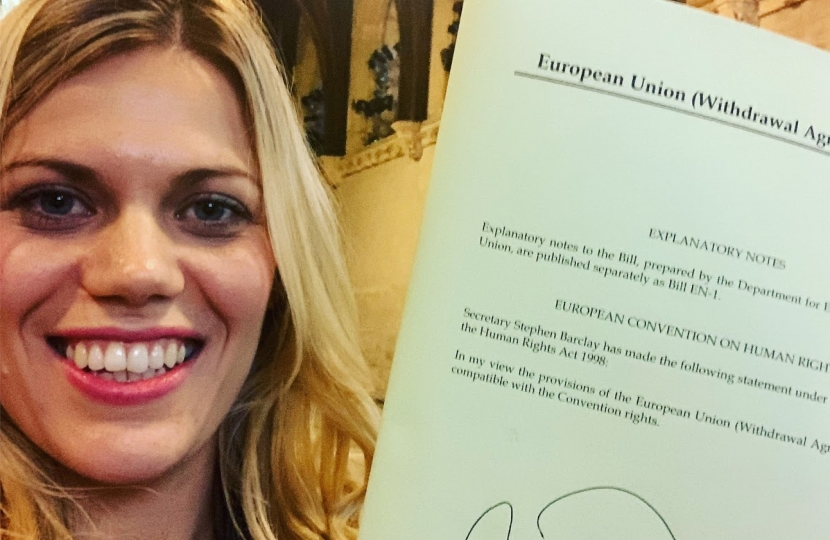 Taking back control of our money, our borders and our laws

This afternoon I voted in favour of the European Union (Future Relationship) Bill, which passed by 521 votes to 73. This Bill will put into law the ‘exit deal’ reached between the EU and the UK negotiating teams last week, implementing our agreements on trade, security, tax ,transport and a range of other areas.

Unfortunately the debate today was heavily oversubscribed and so I wasn’t able to speak, but I know that these are issues of great importance to residents across Penistone and Stocksbridge so I will set out below some of the comments that I would have made in the Chamber of the House of Commons had there been more time.

I am delighted that this Deal, which comes into effect on New Year’s Day, fulfils our commitments to the British public to take back control of our money, our borders and our laws. The deal we have secured is the first Free Trade Agreement the EU has ever reached based on zero tariffs and zero quotas, and is great news for families and businesses in every part of the UK. The fact that both UK and EU representatives are pleased with the outcome is a triumph of negotiation and their achievements should be recognised.

I know many of our local businesses have been concerned about the prospect of having tariffs imposed and so the Free Trade Agreement is excellent news for importers and exporters across our constituency. When I have spoken to and visited businesses across Penistone and Stocksbridge this year, including farmers, steelmakers and other manufacturers, their message for the Government has been clear, ‘we need a deal.’

And the agreements reached on travel, transport, procurement and security will also provide reassurance to those people whose livelihoods depend on physical and virtual access to EU countries. Most people I have spoken to and heard from are extremely relieved that this deal has been reached, especially since the prospect of ‘No Deal’ loomed large over recent weeks.

Since the EU referendum three and a half years ago, politics in the UK has been turbulent. We’ve had three general elections in less than 5 years and in October last year, Parliament became paralysed, unable to find a way through disagreements about what ‘type of Brexit’ we should pursue, or whether we should leave the EU at all. These disagreements – between Remainers and Leavers – have dominated our national conversation for the last four years, and have sadly divided communities and even families.

Many have rightly criticized the previous Parliament for the length of time it took to resolve these issues, and I share these frustrations. In 2016, the majority of people in our area, and across the UK, voted to leave the EU but it has taken four and a half years to make a clean break. There were many different reasons why people voted to leave the EU, but the overriding sense was that the UK should be a free and independent country, able to govern ourselves in our own best interests. All sorts of economic, political and social arguments were made about why this was a bad idea, but many of these arguments missed the point;

it is a fundamental human desire to want to control our own destiny and most people believe that decisions should be made as close as possible to the people they affect. And it’s a long way from Brussels to Barnsley.

Last year’s General Election settled the political argument, returning a Conservative majority Government with a mandate to Get Brexit Done. But even once the Withdrawal Agreement was signed, it was never going to be easy or simple or straightforward to extricate ourselves from the EU after 40 years of economic and political union. These issues – ones of sovereignty, autonomy, security and trade – are complex and interrelated and take time to resolve. Many predicted that it would take ten years to reach a Free Trade Agreement with our EU partners; the fact that this has been achieved in just eleven months is a reflection of the political will and skill on both sides to get it done. The Prime Minister was criticised in January for legislating to end the Transition Period on 31st December 2020, but without that deadline I don’t believe this agreement would ever have been reached, especially in the context of the COVID-19 pandemic.

This is a big political moment for the UK. None of us know what the next few years will hold – especially at the moment – but we can look forward to an independent future as an independent nation. Our success in being the first country in the world to approve and roll out a coronavirus vaccine – and the fact that we have guaranteed the Oxford vaccine at cost price to developing countries - is evidence that the UK has what it takes to be innovative, nimble and outward looking.

Over the last four years, many opinions on the extremes of the Brexit debate have dominated the airwaves. From those who have painted the EU as the ‘goodies’ and Brexiteers as ‘bigots’, to those who insisted that only a No Deal Brexit would satisfy, it has been hard to find the middle ground. But it’s crucial now that we move away from the extremes of the debate and from the hyperbole that has defined it and find a way forward that is optimistic, realistic and united.

To do this, we must consider ourselves as one United Kingdom with sober judgement; not talking down our strengths and our potential, but also not pretending that we can succeed without strong relationships with other countries in Europe and the world. This is a time for reflection and I hope we can seize the opportunity to be bold, creative and ambitious as we re-imagine what it means to be independent and self-governing for the first time in over 40 years